December 12, 2019
I went to the park here in town. It seems to be the place to go especially if you have kids. However, there really weren't a lot of people there when I got there. There was one couple sitting on a bench talking. I didn't get close enough to hear what they were saying, but I could see in the woman's eyes that it was something important. She was really listening to what he was telling her. Not listening like what am going to say next, but actually listening to what he was saying. I could tell that whatever he was telling her meant a lot to him and the fact that she was really listening seemed to make it easier for him to talk and say what he needed to say. She seemed to be feeling a bit overwhelmed by her body language. Like she needed to hear what he was saying, but it was very hard to hear. Her body language was telling him that she didn't like what he was saying but to keep going anyway, if that makes any sense at all. I guess that was the feeling I got from the way she was holding herself. It was like she felt bad for whatever he was saying, but let him continue to get it all out. They were the only one's that I saw that were really interacting other then the kids on the playground having fun and some parents sitting on the benches watching the kids. I stayed for about an hour or so and actually enjoyed being there myself as well. 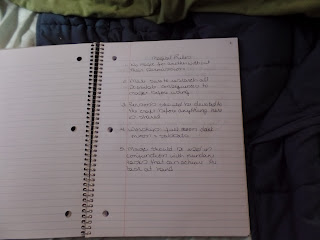